Frames from the Edge: Helmut Newton

There’s been many fashion photographers over the years but few have had as much influence and impact as Helmut Newton. Born in Berlin but his family moved to Australia before the second World War .

They say immitation is the best form of flattery and in Newton’s case he was widely imitated. His fashion photography style was provocative, erotically charged black-and-white, his photos were a mainstay of Vogue and many other publications from the mid 1950’s until onwards. His death in 2004 in a car crash was a shock to the fashion world as a whole.

One of my favourites was ‘Woman Examining Man’ shot in St Tropez. I love the confident , cockyy, challenging way the woman is looking at the man. It’s very much a ‘role reversal’ and one would normally 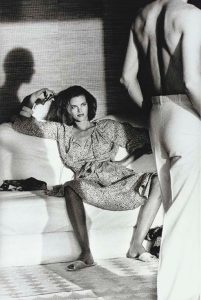 expect to see a man adminring a woman. Whilst the woman is devouring the man with her eyes, she is sitting provocatively with her legs wide. The man is posing topless and provocatively. Though we don’t see his face we can see the shadow of his head leaning towards the woman. It’s almost as though he is in the process of making contact. Challenging  attitudes and changing gender roles was one his greatest achievemants and a trait running through his work.

Like many photographers I myself had been influenced by Newton and aspired to create similar images throughout my career – sometimes successfully but others not so…..

In this video the viewer gets to join a crew that follows Newton around in various countries, on various shoots, in interviews with models and discussing his work, and then we see how a heart attack in the 70s helps him to ‘re-focus’ and produce some of his best work.

Enjoy the video and watch a master at work.